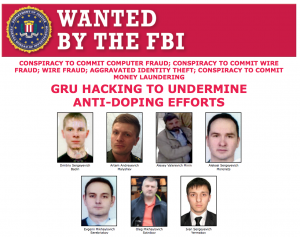 A grand jury in the Western District of Pennsylvania has indicted seven defendants, all officers in the Russian Main Intelligence Directorate (GRU), a military intelligence agency of the General Staff of the Armed Forces of the Russian Federation, for computer hacking, wire fraud, aggravated identity theft, and money laundering.