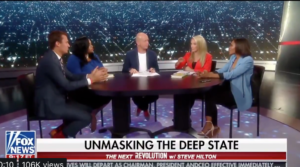 Steve Hilton of Fox News think so, but rest assured, he is mistaken.

Hilton argues, without evidence, that the New York Times author who exposed a chaotic White House comes from “the deep state.” The argument doesn’t need evidence because it, at least to Trump, self-evidently true. Anybody in Washington who, in the course doing their duty, offends the president  is part of the deep state. So, if the president is bothered, the offender must be a “deep state radical.” In person, the radicals turn out to be registered old-school Republicans like Robert Mueller and James Comey supported by dweebish mainstream Democrats like Rod Rosenstein and Rep. Adam Schiff.

The author of the anonymous Op-Ed almost certainly does not come this bipartisan Washington elite The cynical prose and the prosaic cynicism of Times author’s depiction of a White House staff babysitting an ignorant and impulsive president in order to pursue tax cuts, deregulation, and climate stupidity could only have come from one place: the elite of the contemporary Republican party.

To blame the bad news of Trumpian dysfunction on the “deep state” is to dress up alternative facts as good TV, which, come to think of it, pretty much summarizes Trump’s survival strategy.

Hilton’s underinformed “unmasking” of the true nature of the national security faction that is mobilizing against Trump. This  faction is getting less secretive: 177 of its members identify themselves here. As a group they are not radical and not particularly liberal, especially on military and intelligence issues. Most Washington Deep Staters can be described as conservative cosmopolitans who are comfortable working with liberals  (e.g. Mueller and his cadre of high-powered lawyers who, shocker coming, donated to Democrats) and liberals comfortable the law enforcement and/or the military mileux.

This faction is turning on Trump because his lawlessness is not only a threat to individual liberty and to a functioning democracy but to their jobs. Their future livelihoods depend on the legitimacy of the secret agencies and programs created by the National Security Act of 1947 and the Patriot Act of 2002. They know better than anyone that Trump’s actions, unguided by a coherent thinking, could result in  U.S. policies–another war launched on false premises, another mass surveillance program defended by deceit–that will discredit federal agencies and endanger their budgets in the way the Iraq war and Edward Snowden did.

This faction should be taken seriously. In Washington, there are a dozen federal agencies whose expenditures, programs, accomplishments and failures are mostly hidden from the view of the average citizen. Led by CIA and NSA, they command combined budgets of at  $60 billion, a significant number though only a small fraction of the government’s $3.1 trillion billion budget.

Not all of these agencies are completely secretive. The State Department and the FBI are the most transparent. CIA, NSA and DIA are highly secretive, and some are utterly unknown. Do you, the average citizen, know what the NGA, the National Geospatial Intelligence Agency does with its $4.9 billion annual budget? No, you don’t because by law, you cannot.

This is not to suggest that the leaders of  these secret agencies diabolically control the U.S. government or the White House. They do not. Stephen Walt describes them as a bipartisan elite “hiding in plain view.” But there is no disputing that the leaders of the agencies, current and former, are powerful, influential, and opaque in the schematics of Washington power.

Most Washington Deep Staters can be described as conservative cosmopolitans who are comfortable working with liberals  or liberals comfortable with law enforcement and/or the military.

This web site, its editor and contributors, use the term “deep state,” as short hand for the secret agencies/security forces of the U.S. government (and Russia, China, United Kingdom, Israel, Iran, Saudi Arabia, and so on.

The phrase “deep state” has conspiratorial overtones that are sometimes unfortunate, sometimes historically apt. The American deep state, to name but three historical examples, launched mass surveillance and mind control experiments in the 1950s, obstructed the investigation of the assassination of President Kennedy in the 1960s, and connived in the Iran-contra affair in the 1980s. Conspiratorial overtones may irritate sensibilities inside the Beltway . Outside the 202 area code conspiratorial fears may seem more  appropriate, if not commonsensical.

On the Deep State News blog, we use the phrase “the deep state” in a global, empirical, and non-partisan sense. The “deep state” is the political realm created, controlled or influenced by secret intelligence agencies and security forces.

How the U.S. Intelligence Community Is Intervening in the 2020 Election