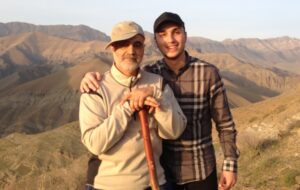 U.S. intelligence has long assessed that Iran’s Quds Force and Lebanon’s Hezbollah work closely together in projecting Iranian power in the Middle East. In the case of the their two most famous commanders, the connection was personal as well as political.

While hunted by Western intelligence services, the two men became heroes in their own countries for standing up to Israeli and Saudi-funded jihadists.. Soleimani commanded Iranian forces that drove ISIS out of Iraq in 2014 and saved the Syrian government of Bashar al-Assad when it was close to falling to Al-Qaeda forces in 2015.

The relation between Soleimani and Mughniyeh family started in 1998 when he was tapped to be the commander of the IRGC’s Quds Force. Since that year, Suleimani constantly went to the house f Hezbollah’s military commander Imad Mughniyeh who was assassinated by Israeli Mossad in Damascus on February 12, 2008, according to the Al-Akhbar’s article.The relation between the two commanders became closer after they repeatedly face death together, Qassem says. One of that incidents took place in July War in 2006. At that night, and due to intensified Israeli bombing of Lebanon, Mughniyeh and Suleimani (along with his associate) moved for another place. While moving, Suleimani pulled Mughniyeh by his shoulder addressing him: “Stay back, I will secure the road. You have to stay alive.”

Soleimani was killed one year ago this by a U.S. air strike in Baghdad.

In Farsi: Inside the IRGC and MOIS.

The Coronavirus Truce: Guns Falling Silent Across the Middle East