The response to RT’s interview last week of the two Russian men charged with participating in the poisoning of a former Russian intelligence officer in England raises both questions.

Speaking with RT editor-in-chief Helen Simoyan, Alexander Petrov and Ruslan Boshirov gave an odd account that begged at least four questions about the men’s veracity, according to U.S.-controlled  Radio Free Europe. The men said they went to “wonderful” Salisbury to see a famous cathedral that is “123 meters tall.” They sounded stilted, to say the least.

In Russia, the pro-Putin media “wasted no time peddling rumors about the men’s sexuality — an apparent effort to counter the idea they could be GRU officers,” says RFE.

The Guardian reports that MI6 officials stand by the charges, insisting  the two men are “blatant” liars.

What Do Independent Sources Say?

Bellingcat, the open-source investigative site, and The Insider, a crowd-funded news site run by a U.S.-based former expat, allege the two men were operating under official cover.

These sources are credible, though not infallible. Bellingcat reporters have done good work on the complicity of U.S. arms manufacturers in war crimes in Yemen. They have also reported tendentiously on Syria.

The Insider was founded on the premise that U.S. coverage of Russia is ‘biased and inaccurate” The site does not reflexively support the anti-Russian orientation of Western intelligence agencies like MI6. Nor is it a front for Putinism.

Two caveats: Their findings about the Skirpal suspects are more inferential than direct, and they depend on insight from anonymous sources. That said, their take is worth reading.

Original Russian documents reviewed by Bellingcat and The Insider confirm definitively that the two men were registered in the central Russian resident database under the names Alexander Yevgenievich Petrov and Ruslan Timurovich Boshirov, respectively, and were issued internal passports under these names in 2009. However, no records exist for these two personas prior to 2009. This suggests the two names were likely cover identities for operatives of one of the Russian security services.

The strongest piece of evidence, I think, is a travel manifest obtained by The Insider.

Of course, evidence can be faked and the authenticity of the document is not confirmed. But if the document is authentic, it shows that Petrov and Boshirov made their travel arrangements right before they left Russia. In the RT interview, they said they had been planning their visit to Salisbury for “a long time.”

Amanda Knox, a U.S. college student accused of murder in Italy in 2007, did  cartwheels in detention. Knox’s odd behavior (and sexuality) made her guilty in the eyes of many Italians. The combination contributed to her conviction for a crime that DNA evidence indicates she did not commit.

The Central Park 5, accused of rape in New York City in 1989 confessed to a horrific crime that DNA evidence shows was committed by another man. The racist imputation of black sexuality convicted the five men in the court of public opinion (and the mind of a certain bankrupt real estate mogul).

The RT video, taken alone, cannot be considered dispositive of the two men’s involvement in the poisoning of Skirpal, a former intelligence officer who had a falling out with Putin.

The evident desire of RT’s editor to change the subject from the suspect’s culpability to their sexuality may or may not be an expression of the Putin government’s official homophobia. But it does strike me as  a propagandistic maneuver.

After the interview Simoyan took to Twitter to talk about Petrov and Boshirov’s appearance–not their actions, to her 580,000 followers. Here’s a machine translation. 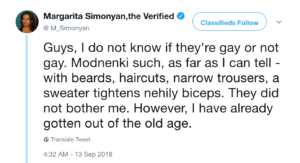 Are Petrov and Boshirov guilty or gay? Sounds like a false choice. Gay is irrelevant. I suspect they were involved in the Skirpal affair but reserve final judgment.

Spy Fall: Russian Diplomat Who Died in Berlin Was the Son of Senior FSB Official